Office of the Auditor General of CanadaOAG reports published in the past are available through Publications.gc.ca.

2005 September Report of the Commissioner of the Environment and Sustainable Development Case study 1.2—Marine protected areas and areas of interest

Background. The Gully is the largest submarine canyon in the western North Atlantic and is located approximately 200 kilometers off the coast of Nova Scotia, near Sable Island. The Gully has long been the focus of conservation interest, largely due to the presence of endangered northern bottlenose whales and the Gully's unique habitat. Concerns about the Gully increased with oil and gas exploration and production in the surrounding area. Given its depth and the relative inaccessibility to human use, the Department had acquired little knowledge about the Gully.

Designating the Marine Protected Area (MPA). Beginning in 1999, Fisheries and Oceans Canada undertook a three-year assessment of the environmental and human-use factors affecting the proposed Gully MPA. The Department conducted a science review, including seabed mapping, which revealed more about the uniqueness of the Gully habitat, including identifying the highest known diversity of deep sea coral species in Atlantic Canada. The Department's assessment recommended designation of the Gully as an MPA.

The Department proposed boundaries for the Gully to include:

Zone 2—a fishing-only area with some restrictions, and

Zone 3—an area where fishing is allowed with fewer restrictions and other activities are allowed with permission.

The Department also added a clause in the regulation stating that no one will carry out an activity in the vicinity of, or in an area adjacent to, the Gully that will negatively impact the Gully.

The Gully Marine Protected Area Regulations came into force in May 2004.

Need for a management plan. The Department is now finalizing the management plan for the Gully MPA. The plan will include the MPA's goals and objectives, how they will be reached, and how success will be measured. According to the Department, the Gully management plan will address conservation and management strategies and provide stakeholders with greater certainty about the conduct of activities within and in the areas adjacent to the MPA. 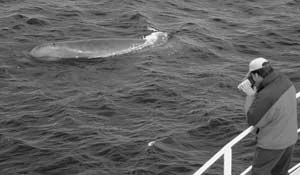 Photographing an endangered northern bottlenose whale in the Gully

Background. The Bowie Seamount is located 180 kilometres west of Queen Charlotte Island. It is an inactive volcano that ranges in depth from 25 to 3,100 meters below the sea surface. Seamounts are often associated with areas of high productivity and have been recognized internationally as needing protection.

In December 1998, Bowie Seamount was identified as an area of interest to be designated as a marine protected area. It was selected due to its high biodiversity and unique habitat.

Department's initial assessment. The Department's 1999 initial ecosystem assessment of the area of interest noted the threat of overfishing to resident sablefish stocks. It noted the uncertainties associated with the health of the Bowie Seamount sablefish stocks and the impact of the fishery on these stocks. The Department's policies provide for interim measures to protect the resources and habitat of an area of interest should they appear to be threatened.

Background. The Report of the Mackenzie Valley Pipeline Inquiry recognized the need to protect beluga whales and their summer habitat in and around the Mackenzie Delta as early as 1977. The Department established the Beaufort Sea Integrated Management Planning Initiative in 2000. Its planning forum decided that the designation of a marine protected area (MPA), Tarium Niryutait, was the highest priority.

Planning accomplishments. Our review of the proposed MPA showed that the Department had done the following:

Planning issue. The Department's evaluation did not establish whether the proposed MPA would protect the beluga whales and their habitat from two key environmental quality issues, oil and gas development in the adjacent area and potential changes in the amount and quality of water in the Mackenzie River drainage area.

Concern. We are concerned that, five years after the Beaufort Initiative began, the Department's evaluation of two key environmental risks did not conclude whether designating an MPA would achieve the desired protection for belugas.