Most audited financial statements were credible and provided on time

The Office of the Auditor General of Canada provided the Government of Canada with an unmodified audit opinion on its consolidated financial statements for the 21st consecutive year. This opinion is an important contribution to the ability of Canada to meet its commitments under the United Nations’ 2030 Agenda for Sustainable Development. In particular, the opinion helps Canada meet Sustainable Development Goal 16.6: “Develop effective, accountable and transparent institutions at all levels.”

Overall, we were satisfied with the timeliness and credibility of the financial statements prepared by 68 government organizations we audit, including the Government of Canada.

One opinion is still outstanding: the one on National Defence’s Reserve Force pension plan. For many years, we have not been able to issue an audit opinion on the plan’s financial statements. This has been because of significant and persistent problems with the department not retaining all the documents that support the data used to estimate pension obligations. Although National Defence has been actively developing ways to retain this information and gathering the supporting documents needed for us to complete our audit, much work remains to be done. On the basis of the progress made by National Defence and the audit work we performed to date on the 31 March 2018 financial statements, we expect to be able to complete the audit in early 2020.

The independent auditor’s report has been enhanced

The independent auditor’s report in the 2018–2019 Public Accounts of Canada and any other recently audited financial statements has a new format. This was required because of changes in auditing standards effective for periods ending on or after 15 December 2018. The enhanced auditor’s report offers more organization-specific information, which will better help users of financial statements make informed decisions.

Our independent auditor’s report on the consolidated financial statements of the Government of Canada is found in Section 2 of Volume I of the Public Accounts of Canada.

We noted 4 significant instances of non-compliance

We noted 4 instances of non-compliance during 3 financial audits this year. A new instance came up during the audit of the National Arts Centre. The corporation used funds from one project to cover the cost overruns of another project, which, in our opinion, was not in accordance with approved authorities. For more details about the National Arts Centre, refer to our link to a portable document format (PDF) fileindependent auditor’s report in the organization’s 2017–2018 Annual Report.

The 3 other instances of non-compliance were the same ones we reported in our Commentary on the 2017–2018 Financial Audits and remained unresolved. Two of these instances related to appointments of officer-directors, which came up during the financial audits of Ridley Terminals IncorporatedInc. and the Canada Development Investment Corporation. The third instance related to the remuneration of the President and Chief Operating Officer of Ridley Terminals Inc.

This section provides information to show how the Trans Mountain pipeline was reflected in the government’s consolidated financial statements.

In August 2018, the federal government purchased the Trans Mountain pipeline through the Canada Development Investment Corporation, which is a government business enterprise. To finance the transaction, the Government of Canada made a loan to the corporation.

Exhibit 1 has additional information to help parliamentarians understand how the transaction was reflected in the government’s consolidated financial statements. 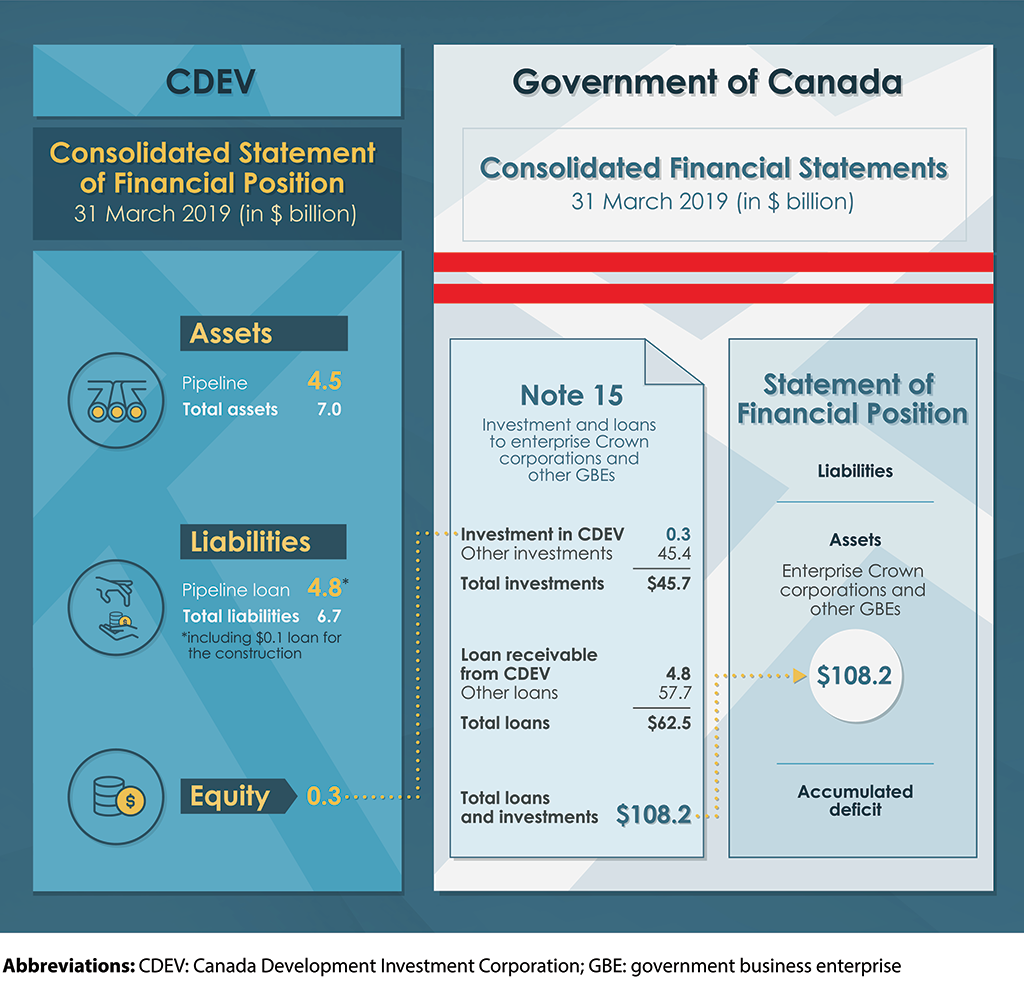 The transaction was mentioned in the government’s financial statements discussion and analysis in Section 1 of Volume I of the Public Accounts of Canada.

Opportunities for improvement noted in the 2018–2019 financial audits

We informed federal organizations, including Crown corporations, of opportunities to improve their practices

Financial audits identify opportunities for organizations to improve their systems of internal control, streamline their operations, or enhance their financial reporting practices. We issue management letters to inform the organizations about these opportunities and about more serious points, such as inadequate internal controls that can create risks of errors in financial reports.

As part of our annual financial audits, we follow up on the points we have raised in previous years so we can monitor management’s progress in addressing them. 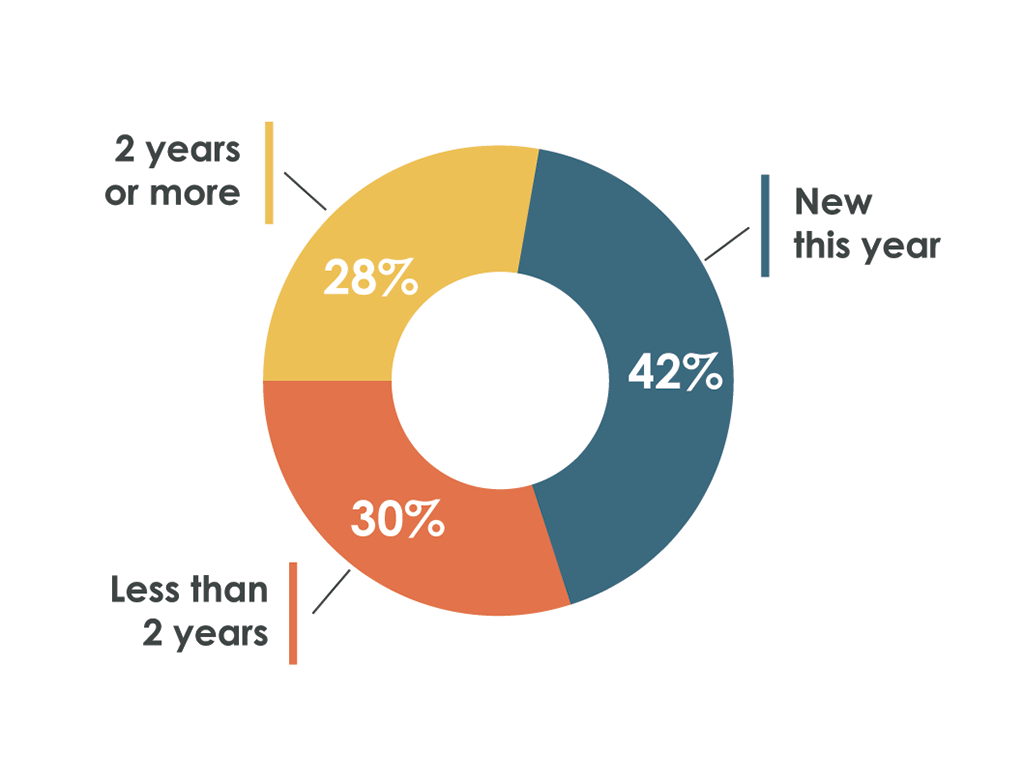 We noted opportunities for improvement in various areas, but the most common ones were

We continued to note many opportunities for improvement of IT general controls, mainly those related to access

Similar to what we reported last year, almost half of the unresolved management letter points as of 30 June 2019 resulted from our reviews of IT general controls over systems supporting financial reporting. Such controls included access to programs and data, program development, program changes, and computer operations.

Our reviews are limited to certain financial audits, and the specific controls reviewed depend on the audit approach chosen. In addition, the reviews are not always performed annually and can be limited to following up on previous years’ results.

In the reviews we conducted, we targeted access controls because they are fundamental for the functioning of IT-dependent financial processes. Access controls, however, go beyond financial processes. In an IT environment, they ensure that only authorized individuals can access any electronic data. If those controls are absent or weak, the integrity of the data is at risk.

We informed organizations of the need to correct these important points because strong access controls are needed to safeguard the integrity of the government’s data.

In May 2018, in our Commentary on the 2016–2018 Performance Audits of Crown Corporations, we reported that timely decisions on corporate plans were a problem in 4 of the 13 Crown corporations we audited between 2016 and 2018. In this report, we provide additional insight on the process for preparing and submitting corporate plans and an update on the timeliness of submissions and approvals of corporate plans.

Importance of corporate plans. Crown corporations operate with considerable independence under the Financial Administration Act. As an important step in their accountability to their shareholder (the Government of Canada), most Crown corporations submit their corporate plans to the responsible ministers every year for approval by the Treasury Board. The plans set out objectives, strategies, and operational and financial performance measures and targets.

The process. In March 2018, the Treasury Board of Canada Secretariat updated its Guidance for Crown Corporations on Preparing Corporate Plans and Budgets. The updated guidance provides more details on key milestones and the accountability of Crown corporations to the government (Exhibit 3).

Source: Based on information from the Treasury Board of Canada Secretariat’s Guidance for Crown Corporations on Preparing Corporate Plans and Budgets

Timeliness of submissions and approvals. We reviewed the submissions of corporate plans during our 2018–2019 financial audits of the 35 Crown corporations subject to this requirement. We found that 6 of 35 (17%) Crown corporations as of 30 June 2019 had not yet submitted their corporate plans to their responsible ministers within the timeline required by regulations. Furthermore, 4 of 35 (11%) corporate plans as of 30 June 2019 had not yet been approved by the Treasury Board. For Crown corporations to move forward with any changes necessary to continue to fulfill their mandates, they need ongoing communication from the government about the status of their plans. They also need the government’s timely decisions on the strategies and objectives in these plans.

Process for board appointments. The maximum number of members on each board of directors is defined in the corporation’s legislation. For most Crown corporations, the minister is responsible for appointing the directors with the approval of the Governor in Council. Each director is appointed for a specific term. These appointments are expected to ensure, as far as possible, that not more than half of the directors’ terms will expire in any given year. For the majority of Crown corporations, once a director’s initial appointment term has ended, the director continues in office until a successor is appointed.

Delays in appointments. We found that 13 of the 42 (31%) Crown corporations we reviewed had delays in appointments. This meant that directors either continued to sit on boards after their terms expired while they awaited the government’s decision on whether to reappoint or replace them, or the positions became vacant. Of these 13 corporations, 4 had at least 1 sitting director whose term had been expired for at least 1 year, and in some cases, for at least 2 years.

We also noticed that an additional 9 Crown corporations had appointments expiring in the upcoming 6 months and that these directors had not yet been replaced or reappointed.

As shown above, the problem of delays in appointing board members persisted.