Background to the Commentaries on Financial Audits

Background to the Commentaries on Financial Audits

Financial audits represent about half of the OAG’s work. It costs roughly $53 million each year to complete those audits and related work, or about 51% of the OAG’s annual planned spending.

Of that financial audit work, about 20% goes into the biggest financial audit in Canada—the Government of Canada’s public accounts. For the 2020–21 fiscal year, the OAG was required to audit the financial statements of 69 federal organizations (see Appendix), at a cost of about $39 million.

For the 2020–21 fiscal year, the OAG’s federal financial audits covered, on a combined basis, assets of $1.9 trillion and liabilities of $2.6 trillion. 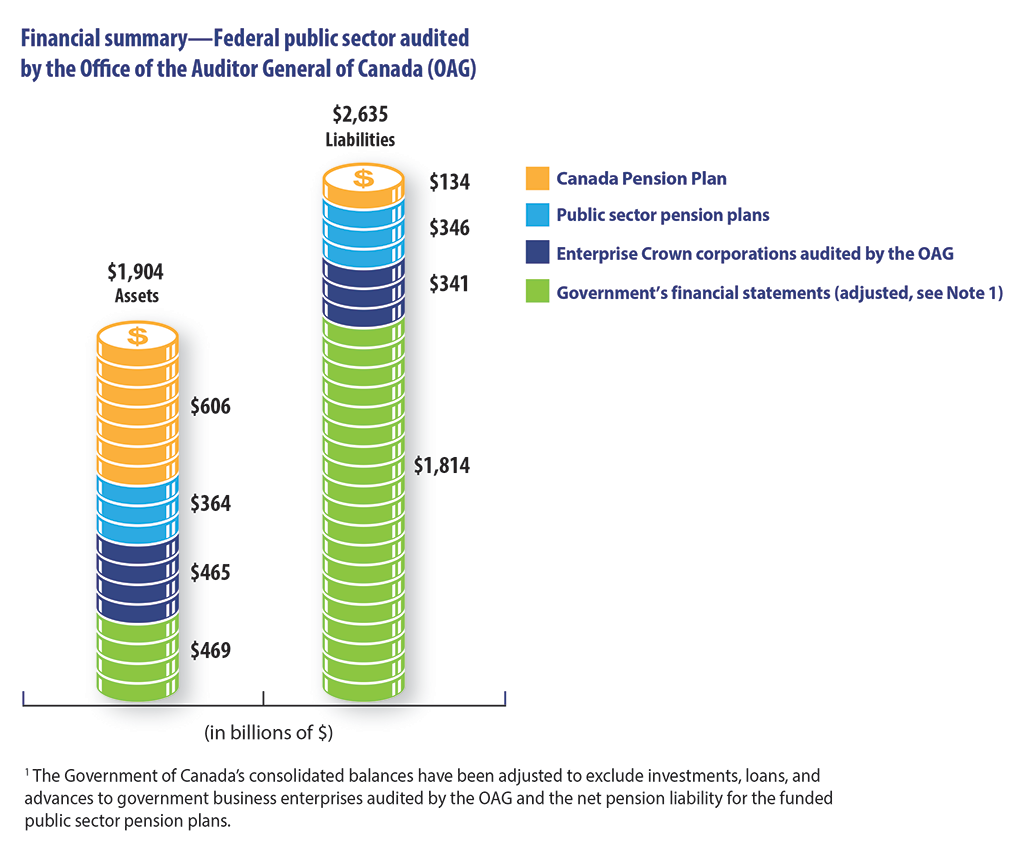 Financial reporting is fundamental to the accountability relationship

What accountability is and why it is important

The federal government as a whole as well as individual organizations must provide elected officials and the public with information about their decisions and actions to show how they spent taxpayer dollars to deliver programs and services. This is called the “accountability relationship.”

Accountability and good governance go hand in hand. Examining the performance of government officials is a way to determine whether they are working to deliver programs effectively and economically. Good governance therefore builds public confidence and trust in government.

Parliamentarians exercise oversight throughout the fiscal year—from the time they approve the government’s budget to the time they receive the Public Accounts of Canada and the annual reports of other federal organizations. 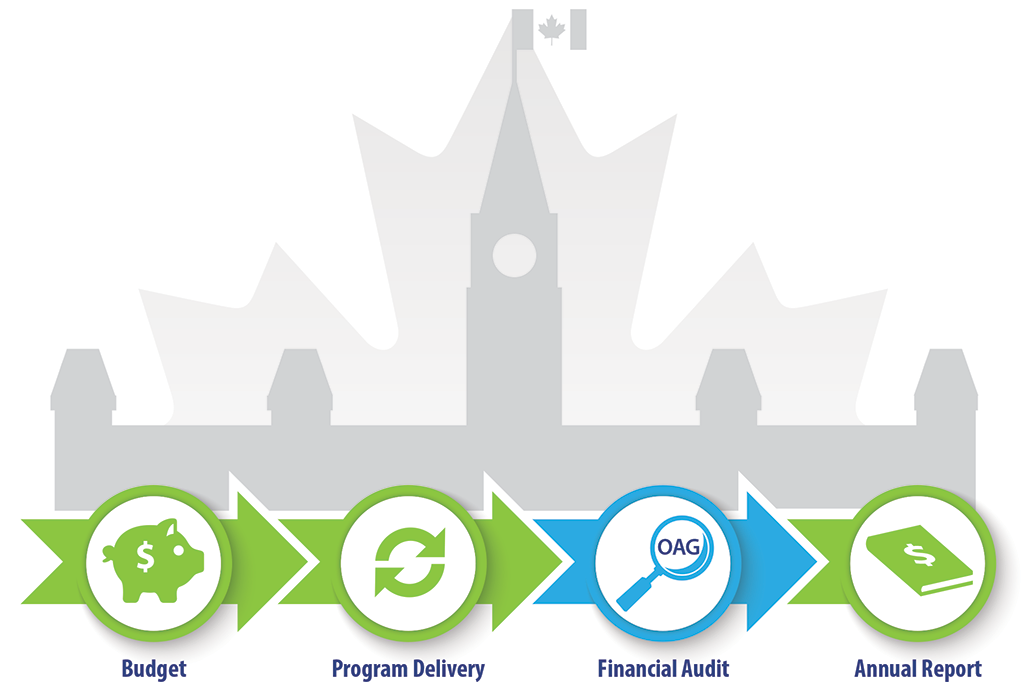 Although lots of financial information is publicly disclosed throughout the financial reporting cycle, it can be difficult to find or hard to understand.

Financial reports are used to provide accountability. These documents are important because they explain to elected officials and the public how tax dollars have been spent and how much taxpayers can expect to pay to fund future programs and services.

An annual report is essentially a financial report card that government and other organizations typically produce as their primary accountability document to provide information on their financial situation and performance for a given fiscal year. 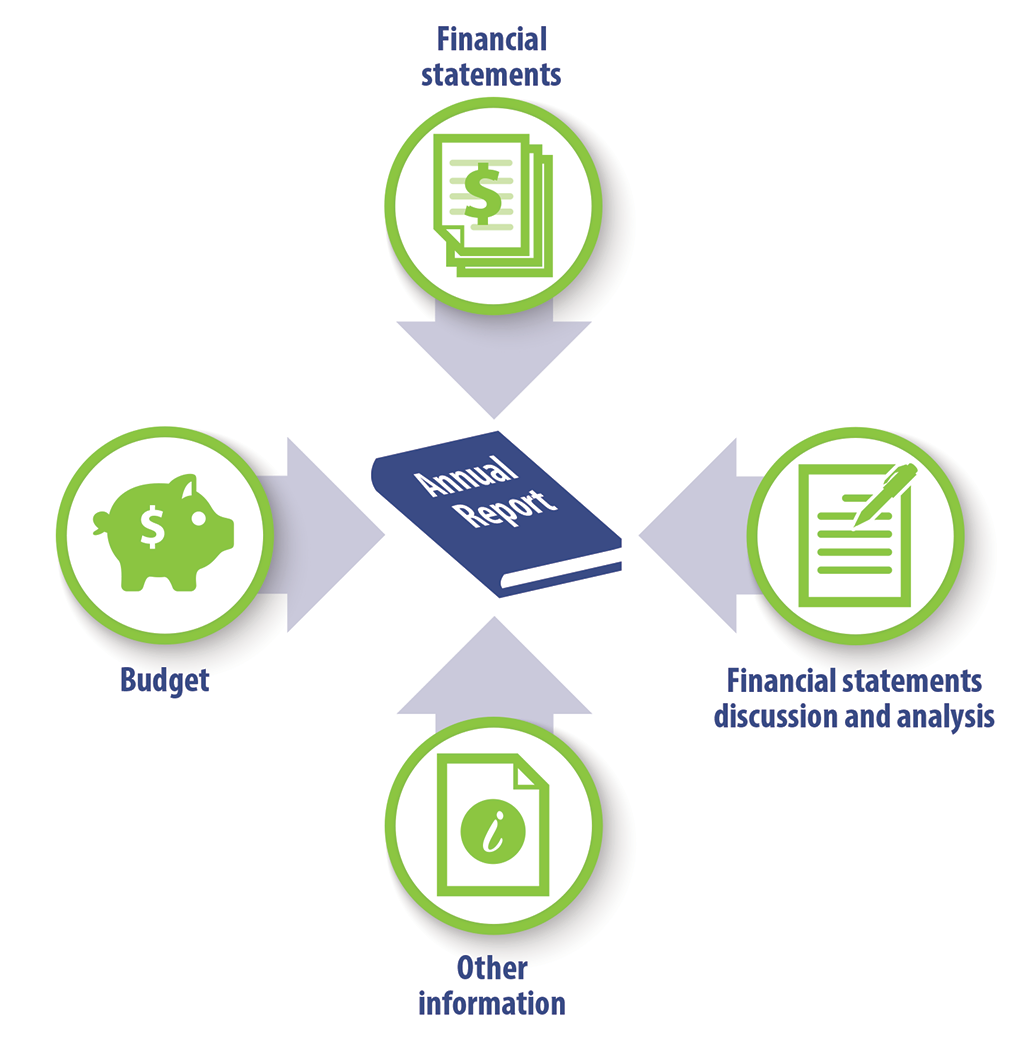 The FSDA is a narrative that explains the numbers presented in the financial statements and any significant differences from the budget, and it provides insights about future financial prospects.

Public attention often focuses on a government’s annual financial performance against its budget. However, this focus provides only partial insight into the overall financial health of the government or organization. It is important to consider not just the numbers, but the full breadth of the critical information that is provided in an annual report.

Financial statements must be credible

The International Financial Reporting Standards, which are issued by the International Accounting Standards Board, are another common set of standards. They are used by those Crown corporations whose operations are more commercial in nature, such as Canada Post, Export Development Canada, and the Canadian Broadcasting Corporation.

Accounting standards are broad principles rather than prescriptive detailed guidance. The purpose of their uniform application is to create consistency over time and between governments and organizations. Consistency over time is important to reach meaningful conclusions about historical trends, and to better understand the financial health of a government or an individual organization—either at a point in time or over a longer period.

The OAG plays a critical role in supporting accountability and transparency

The value of financial statement audits

Audits of financial statements are important for several reasons:

All these elements come together to support the accountability relationship between the government and its individual organizations and elected officials and taxpayers.