Canada has the longest coastline in the world, and oceans under the country’s jurisdiction are home to more than 40 marine mammal species, including whales, dolphins, porpoises, sea lions, seals, walruses, and sea otters (see the full list in the Appendix). Although these marine mammals are important to Canadian ecosystems and culture, many species are in decline because of human activities. The federal government currently considers 14 populations of marine mammal species as endangered or threatened.

The federal government is responsible for protecting marine mammals. The responsibility to reduce threats from human activity is shared among several organizations.

This audit focused on whether Fisheries and Oceans Canada, Environment and Climate Change Canada, Parks Canada, and Transport Canada had adequately protected marine mammals in waters under the jurisdiction of Canada from threats posed by marine vessels and commercial fishing (not including the harvesting of marine mammals).

This audit is important because marine mammals are culturally significant to Canadians. Marine mammals also provide livelihoods to Indigenous and coastal communities, contribute economically to the whale-watching and tourism industries, and support healthy ecosystems. Moreover, commercial fishing and marine vessels can affect Canada’s marine mammal populations. As Canada’s economy grows, the risk of interactions with marine mammals will increase. If not properly managed, these interactions could also affect the country’s economy and environment, as well as Canada’s reputation in wildlife protection.

Overall, we found that Fisheries and Oceans Canada, Environment and Climate Change Canada, Parks Canada, and Transport Canada had not fully applied existing policies and tools to proactively manage threats to marine mammals from commercial fishing and marine vessels, such as entanglements, bycatch, depletion of food sources, noise and disturbance, oil spills, and collisions with marine vessels. These policies and tools included recovery strategies and action plans under the Species at Risk Act, guidelines for planning and managing marine protected areas, and integrated fisheries management plans to implement the Policy on Managing Bycatch. We also found that Fisheries and Oceans Canada lacked the resources and national guidance to effectively support the partners working to respond to distressed marine mammals.

Since 2017—when 12 endangered whales were found dead in Canadian waters—federal organizations have begun to implement a variety of measures and actions aimed at protecting marine mammals by reducing threats from commercial fishing and marine vessels. For example, federal organizations have put in place measures to limit commercial salmon fishing with the aim of increasing food sources for the southern resident killer whale; to reduce entanglements and bycatch from fisheries for the North Atlantic right whale; and to introduce speed limits in some areas to protect both the North Atlantic right whale and the St. Lawrence Estuary beluga whale. Although organizations have recently reacted to these threats for three endangered species, they have yet to apply sustained planning and management policies, tools, and measures to reduce threats for all marine mammals.

The measures that federal organizations have recently begun to implement are presented in this report but have not been audited because their implementation was under way at the end of our audit period.

What we found about… 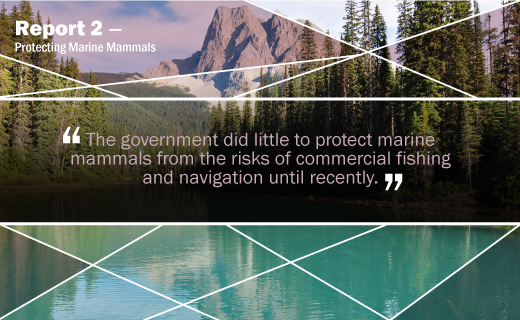