An Office of legislative auditors

The Office of the Auditor General of Canada (OAG) serves Parliament by providing it with objective, fact-based information and expert advice on government programs and activities, gathered through audits. Parliamentarians use OAG reports to oversee government activities and hold the federal government to account for its handling of public funds.

The work we do is called legislative auditing. The Auditor General of Canada is an Officer of Parliament who carries out work on behalf of Parliament, and who is accountable to Parliament. Parliament is Canada’s federal legislature.

Who does the OAG audit?

The Office of the Auditor General audits:

What does the OAG audit?

Government Activities. The Office of the Auditor General audits a vast range of activities conducted by the Canadian federal government and the three territories. These activities cover topics such as health, culture, the environment, finance, agriculture, transportation, and scientific research, to name only a few.

Environmental Matters. The Auditor General’s responsibilities regarding environmental matters increased with the creation of the position of Commissioner of the Environment and Sustainable Development (CESD) in 1995.

What does the OAG not audit?

The Auditor General does not audit topics that fall outside the OAG’s mandate. Examples are policy decisions, which are the prerogative of Parliament and government, and any areas under the exclusive jurisdiction of First Nations, provincial, or municipal governments.

What types of audits does the OAG carry out?

The OAG carries out three main types of legislative audits:

What other work does the OAG perform?

Environmental Petitions. On behalf of the Auditor General of Canada, the Commissioner of the Environment and Sustainable Development (CESD) administers the environmental petitions process.

Environmental petitions provide a way for Canadians to ask the federal government to respond to their concerns about the environment and sustainable development.

For example, petitions can be used to ask federal ministers and departments or agencies to explain federal policy, investigate environmental problems, or review legislation and regulations.

The purpose of these investigations is to bring the findings of wrongdoing to the attention of the organization’s chief executive, and recommend corrective action.

Activities within Canada. The OAG plays an active role in the Canadian Council of Legislative Auditors (CCOLA), which is made up of the federal and provincial audit offices.

International activities. The OAG participates in international activities, organizations and events that impact its legislative audit work. By collaborating with organizations and audit offices both elsewhere in Canada and across the world, the OAG strengthens its legislative audit practice and contributes to the development of auditing standards.

The OAG is committed to meeting its international obligations by sharing its expertise with international organizations involved in public sector accounting, auditing, and accountability activities. It participates in the International Organization of Supreme Audit Institutions (INTOSAI).

The OAG provides capacity-building support to auditors from other national audit offices as part of the International Development Program of the Canadian Audit and Accountability Foundation (CAAF-FCAR). This program, funded by Global Affairs Canada, brings auditors from other national audit offices to Canada for 10 months of training in performance auditing, accountability, and governance.

In addition, the Commissioner of the Environment and Sustainable Development plays an active role in the Working Group on Environmental Auditing (WGEA)—part of INTOSAI—by helping to produce guidelines and reports, and by helping to develop and implement training for environmental auditors. The WGEA aims to improve the use of audit mandates and audit tools in the field of environment.

What is an OAG financial audit?

The Office is also mandated under the Financial Administration Act to assess whether the transactions examined during financial audits comply with laws, regulations, bylaws, and the organizations’ articles of incorporation. This mandate is what sets legislative auditors apart, as specialized skills and knowledge are required to identify compliance matters. The Office provides parliamentarians with impartial information on the degree to which the organizations it audits meet their legislative obligations. In this way, the Office actively supports the oversight responsibility of elected officials.

What is the scope of the OAG’s financial audits?

The Office conducts about 150 financial audits and related work across various jurisdictions every year, including:

The Office spends roughly $44 million each year to complete these financial audits and related work, representing nearly half of our Office’s annual planned spending. 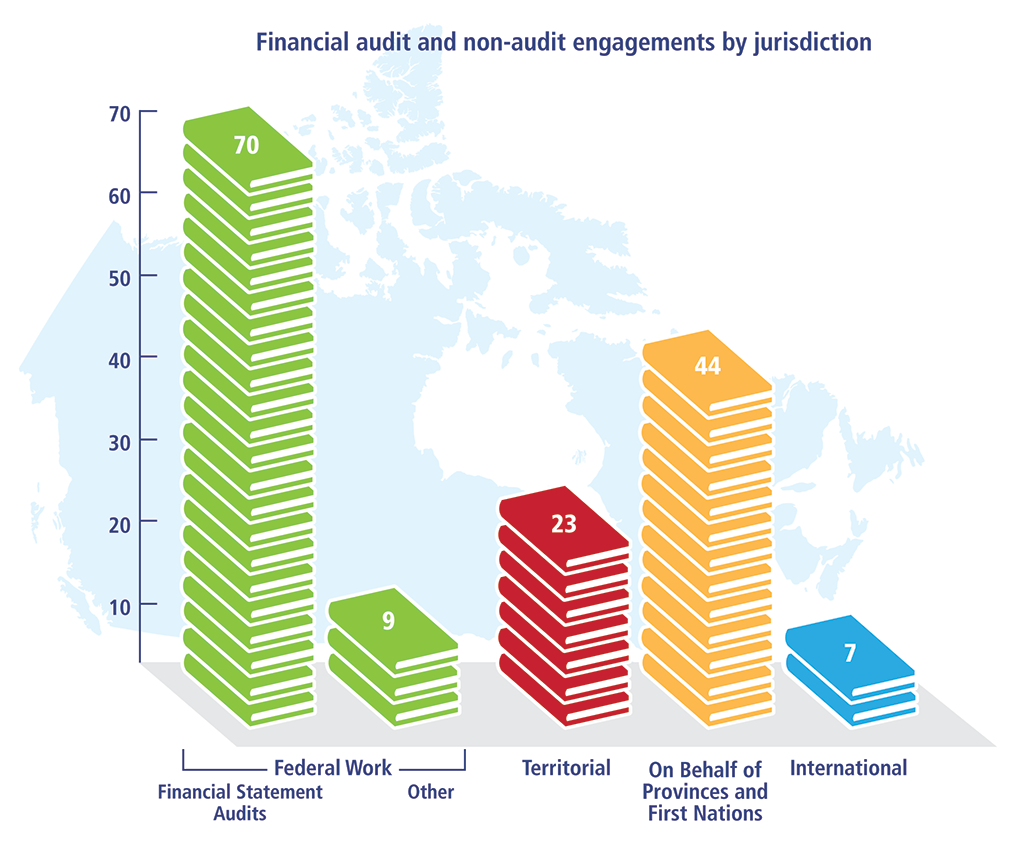 How are OAG financial audits reported?

The Auditor General also expresses an opinion on the Annual Financial Report of the Government of Canada. Published by the Department of Finance, this document provides timely access to understandable and relevant information on the government's financial activity, and includes a full set of condensed financial statements that are based on the audited results, which appear in the Public Accounts of Canada.

The Auditor General also issues a yearly commentary derived from the previous year’s federal financial audits. These commentaries are not audit reports. Starting in 2018, the commentaries include the Observations of the Auditor General on the Consolidated Financial Statements of the Government of Canada, which used to be included in the Public Accounts of Canada.

Financial audits of Crown corporations. In other audits, the Auditor General reports his findings to a Minister of the Crown, which are then included in the annual report of the organization for tabling in Parliament.

Financial audits of Northern Legislative Assemblies. The Auditor General presents the audits of the summary financial statements of the governments of Nunavut, the Yukon, and the Northwest Territories to their respective legislative assemblies.

What is a performance audit?

In other words, a performance audit is an independent, objective and systematic assessment of how well government is managing its activities, responsibilities and resources. Performance audits contribute to a public service that is effective and a government that is accountable to Parliament and Canadians.

Performance audits do not question the merits of government policies. Rather, they examine the government’s management practices, controls, and reporting systems based on its own public administration policies and on best practices.

Performance audits are planned, performed, and reported in accordance with professional auditing standards and Office policies. They are conducted by qualified auditors who:

This translates into a process that can take up to 18 months.

How does the OAG choose the topics of its performance audits?

The Auditor General Act gives the Auditor General considerable discretion about what areas of government to examine. Given the vast number of government activities, choosing topics for performance audits is a complex and challenging exercise. It requires good knowledge of government and its component organizations, as well as a high level of professional judgment. Because choosing topics well is essential to producing reports that are useful to Parliament, the OAG puts considerable effort into this process.

The OAG begins planning its program of audits several years in advance. It conducts a thorough risk analysis to identify those areas that are most significant and relevant to Parliament. Examples of high-risk areas are those that cost taxpayers significant amounts of money or that could threaten the health and safety of Canadians. The Office must also take into account such practical issues as the availability of its financial and human resources.

The OAG may decide to audit a single government program or activity (such as pesticide regulation), an area of responsibility that involves several departments or agencies (such as the protection of cultural heritage), or an issue that affects many departments (such as security of information technology).

The OAG may also consider a topic area significant if it has the potential for improving government results (such as financial management and control) or if it is of great interest to parliamentarians and Canadians (such as national security).

How many performance audits does the OAG do?

The Office of the Auditor General conducts between 25 and 30 performance audits each year.

Does the OAG respond to audit requests?

The OAG receives many requests to conduct audits from individual citizens, groups, members of Parliament, senators, and other parties requesting an audit of a specific area.

The Office pays particular attention to requests for audits from parliamentary committees. The ultimate decision about what to audit rests with the Auditor General. Final decisions about what to audit are made in light of the OAG’s mandate, the significance of the issue, the existing audit schedule, and available resources.

How are performance audits reported?

OAG performance audit reports contain recommendations that can serve as a springboard to lasting and positive change in the way government functions. The OAG publishes responses to each recommendation from the organization being audited.

Reports to Northern Legislative Assemblies. Audits of programs in Nunavut, the Yukon, and the Northwest Territories are reported directly to their respective legislative assemblies.

The graphic below shows how a tabling day typically unfolds at the OAG.

The Auditor General or CESD gives Members of Parliament and Senators a confidential preview of the report before it is tabled in the House of Commons. This is followed by a question-and-answer period.

A media lock-up takes place at the same time to give journalists time to read the report. The OAG ensures that auditors are present to answer their questions.

The Auditor General or CESD holds a news conference after the media lock-up, making a short statement and answering questions.

What happens to OAG performance audits reports after they are tabled?

At committee hearings, the Auditor General, the Commissioner of the Environment and Sustainable Development, other OAG officials and senior public servants from audited organizations are invited to make brief statements. Department officials are asked about the audit findings and how they plan to address our recommendations.

After these hearings, parliamentary committees may present a report in the House of Commons that includes recommendations to the government. The government is expected to table a response to a committee report within 120 days.

What is an audit of a Crown Corporation?

The Office of the Auditor General of Canada (OAG) is required by the Financial Administration Act to conduct a type of performance audit in most Crown corporations. These audits examine whether a Crown corporation’s systems and practices provide reasonable assurance that its assets are safeguarded, its resources are managed economically and efficiently, and its operations are carried out effectively.

Special examinations are a form of performance audit, but their scope is set by law to include the entire entity being audited. In special examinations, the Auditor General provides an opinion on the management of the Crown corporation as a whole.

The OAG publishes a list of recently audited Crown Corporations.

For more information about what they are and the different types, please consult Directors of Crown Corporations: An Introductory Guide to Their Roles and Responsibilities.

If you are a Crown corporation looking for more information about the audit process, please see What to Expect—A Crown Corporation’s Guide to a Special Examination.

How does the OAG decide which Crown Corporations to audit?

The OAG audits most, but not all, Crown corporations. The Financial Administration Act requires the OAG to audit federal Crown corporations at least once every 10 years. The OAG sets the schedule for these audits by considering the 10 year requirement as well as its available resources.

How are audits of Crown corporations reported?

The Auditor General provides Parliament with a copy of these reports in the spring and fall of each year. The reports are published on the OAG’s website at the time of these twice-yearly releases. They are available through the Crown Corporations’ individual websites from the date of their publication.

What is a Crown Corporation?

Crown corporations are owned by the Government of Canada but operate at arm’s-length, giving them more autonomy than most other government entities. They fund their operations in a variety of ways, with some being entirely self-sustaining, some generating revenues and receiving federal funding, and some being funded mainly by the federal government.

Crown corporations account for an important portion of government activity and operate in many sectors of the economy, including transportation, energy, agriculture and fisheries, financial services, culture, and government services.

For more detailed information about Crown corporations, please consult Directors of Crown Corporations: An Introductory Guide to Their Roles and Responsibilities.