National Defence contributes to the defence of North America and to international peace and stability by participating as a member of the North American Aerospace Defense Command (NORAD) and the North Atlantic Treaty Organization (NATO). To meet these commitments, National Defence needs an effective fighter force, which means capable aircraft and personnel.

This audit focused on whether National Defence managed risks related to Canada’s fighter aircraft fleet so that it could meet Canada’s commitments to NORAD and NATO until a replacement fleet is operational.

This audit is important because the Government of Canada identified a fighter aircraft fleet as a critical capability of the Canadian Armed Forces. To meet this capability, the Royal Canadian Air Force needs enough pilots to fly the aircraft and enough technicians to do maintenance and repairs. It also needs enough fighter aircraft to control Canada’s vast airspace and to contribute to international operations at the same time.

In 2016, the Government of Canada directed National Defence to have enough fighter aircraft available every day to meet the highest NORAD alert level and Canada’s NATO commitment at the same time. This direction would require National Defence to increase the number of fighter aircraft available for operations by 23%. The new operational requirement came at a time when the Royal Canadian Air Force faced a growing shortage of trained and experienced pilots and technicians. Furthermore, the current fleet of CF-18 aircraft are already over 30 years old, the CF-18 will continue to become more vulnerable, and there are no plans to improve its combat capability.

To have the number of aircraft needed to meet the new operational requirement, the government focused efforts on increasing the number of aircraft. The government’s original plan was to buy 18 new Super Hornet fighter aircraft, even though National Defence’s analysis indicated that this plan would not help the Royal Canadian Air Force meet the new operational requirement and would make the personnel shortage worse. The government is now planning to buy used fighter aircraft from Australia that are the same age and have the same operational limitations as the CF-18s that the Royal Canadian Air Force are currently flying.

Over and above existing budgets, National Defence expects to spend almost $3 billion on extending the life of the current fleet and to buy, operate, and maintain the interim aircraft, without a plan to deal with its biggest obstacles to meeting the new operational requirement: a shortage of pilots and the declining combat capability of its aircraft. Although National Defence has plans to address some risks, these investment decisions will not be enough to ensure that it can have the number of aircraft available daily to meet the highest NORAD alert level and Canada’s NATO commitment at the same time.

We state in paragraph 3.25 of this report that there was no plan to specifically address the serious problem of the lack of CF-18 pilots. After the period of our audit, National Defence informed us that in September 2018, it approved a plan to address the declining levels of experience among pilots in the fighter force. However, this plan does not address the need to increase the overall number of CF-18 pilots. 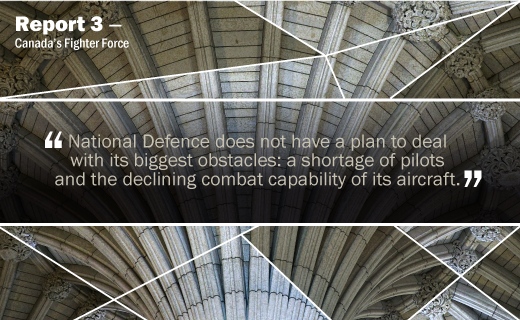