At a GlanceReport 4—Oversight of Government of Canada Advertising

The Government of Canada uses different communications tools, including advertising, to inform the public of its programs and services. Advertising is defined as communications that involve paid placement in media in Canada or abroad. Paid placement can take place in traditional media, such as newspapers, magazines, television, radio, cinema, or billboards, or in digital media, such as the Internet or social media platforms.

This audit focused on whether the Treasury Board of Canada Secretariat and Public Services and Procurement Canada provided adequate oversight to ensure that the Government of Canada was meeting its commitment to non-partisan advertising. In this context, adequate oversight meant that the review processes were designed, implemented, operated, and monitored to meet the federal government’s own requirements.

This audit is important because the Government of Canada committed to ensuring that public funds are not used to pay for partisan advertising.

The decision to send government advertising for external review by an independent body is driven by a $500,000 threshold established by the Treasury Board of Canada Secretariat. When the process was established, the threshold was based entirely on the value of a campaign, with no consideration of important risk factors such as a campaign’s audience reach or topic. In our opinion, high-value campaigns do not necessarily represent a higher risk of partisanship than campaigns with a smaller budget, or than other types of government communications.

We also found little evidence that Public Services and Procurement Canada consistently and thoroughly reviewed all advertising campaigns with a budget of less than $500,000 against all non-partisanship criteria. For example, we found no indication that reviewers requested information to confirm facts and statistics presented in campaigns.

The Treasury Board of Canada Secretariat did not monitor the quality of the reviews of government advertising conducted by Ad Standards. As a result, it may have missed opportunities to identify and rectify weaknesses in the oversight process that the government put in place to ensure that advertising paid for with public funds was non-partisan. 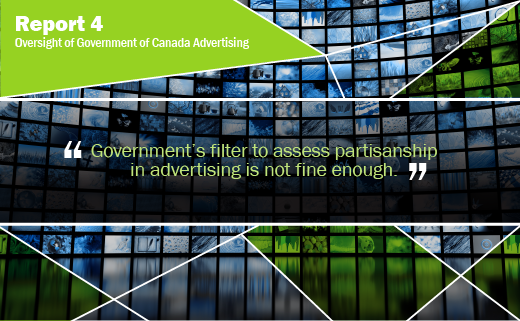