The Royal Canadian Mounted Police (RCMP) is Canada’s largest police force, with more than 18,000 officers in 2018. The RCMP provides Canadians with policing services at the federal, provincial and territorial, and municipal levels, and within Indigenous communities. It provides policing services under contract to about 150 municipalities and to all provinces and territories except Ontario and Quebec.

The RCMP operates through 15 divisions: 1 for each province and territory; 1 for its training facility in Regina, Saskatchewan; and 1 for its National Division in Ottawa, Ontario. The RCMP has about 700 local detachments, providing policing services to much of rural Canada, all of the North, and some urban communities, such as Moncton, New Brunswick, and Surrey, British Columbia. RCMP detachments vary greatly in size, from 2 officers in some rural and remote communities to more than 750 officers in cities.

This audit focused on whether the RCMP provided its officers with hard body armour and semi-automatic weapons called carbines. A key use for this equipment is to protect officers in active shooter situations. The audit also looked at officer training on the use of carbines and pistols and at the maintenance of those firearms.

This audit is important because the RCMP is required to provide appropriate equipment and related training to comply with its duty to protect the health and safety of its officers under the Canada Labour Code and the Royal Canadian Mounted Police Act.

Overall, we found that not all RCMP officers had access to the equipment they needed to respond to an active shooter situation. The RCMP had enough hard body armour nationwide, but its distribution across divisions left some officers without access to it. The RCMP did not set a national standard to manage the acquisition and distribution of carbines, including how many carbines were needed to equip officers. Nor did the RCMP have the necessary information at the national level to determine whether detachments across the country had enough protective equipment to meet the RCMP’s obligations under the Canada Labour Code.

The RCMP acquired and distributed almost three times the carbines and twice the hard body armour that it had in 2014, and it trained officers in their use. However, it did not prepare to meet all the long-term support requirements of adding a new weapon to its inventory, which affected compliance with its policies on both carbine maintenance and the annual recertification on carbine use. In part, these shortcomings stemmed from a lack of planning and oversight by RCMP National Headquarters. 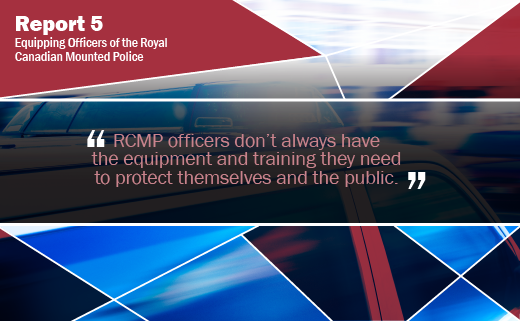