Commissioner of the Environment and Sustainable DevelopmentBiodiversity in Canada: Commitments and Trends

Purpose of this backgrounder

Biological diversity, or biodiversity, is the variety among living things. It operates at 3 fundamental levels—genes, species, and ecosystems:

The United Nations recognizes biodiversity loss as one of the world’s most pressing emergencies, along with pollution and climate change. In 2021, the United Nations Environment Programme stated the following in its Making Peace with Nature report:

Species are currently going extinct tens to hundreds of times faster than the natural background rate. One million of the world’s estimated 8 million species of plants and animals are threatened with extinction. The population sizes of wild vertebrates have dropped by an average of 68 per cent in the last 50 years, and the abundance of many wild insect species has fallen by more than half. … Ecosystems are degrading at an unprecedented rate, driven by land-use change, exploitation, climate change, pollution and invasive alien species. Climate change exacerbates other threats to biodiversity, and many plant and animal species have already experienced changes in their range, abundance and seasonal activity. Degradation of ecosystems is impacting their functions and harming their ability to support human well-being. Loss of biodiversity is anticipated to accelerate in coming decades, unless actions to halt and reverse human transformation and degradation of ecosystems and to limit climate change are urgently implemented.

Likewise, the 2021–22 Global Risks Perception Survey, conducted by the World Economic Forum, identified biodiversity loss as the third-most severe global risk over the next 10 years.

There are 5 principal threats to biodiversity:

Canada is home to an estimated 80,000 species, including mammals, birds, fish, plants, amphibians, reptiles, and insects. Species such as caribou, polar bears, beavers, and loons are depicted on Canadian coins and are among the most widely recognized species in the country. More than 300 species are found exclusively in Canada. Unfortunately, some of Canada’s species that were once quite common, such as bison, Atlantic cod, and the monarch butterfly, have declined drastically to the point that they are at risk. What was once North America’s most common bird, the passenger pigeon, is extinct.

Plants and animals in Canada are dispersed across various landscapes and ecosystems: forests, grasslands, wetlands, lakes and rivers, coastal ecosystems, oceans, and ice. The greatest diversity of species is in the south, where most Canadians live. However, other areas of Canada maintain extensive intact habitats of global significance. Canada has approximately 24% of the world’s boreal forests and about 25% of the world’s temperate forests. Canada’s 1.5 million square kilometres of wetlands make up about 25% of the world’s total. Canada also has the world’s longest coastline, 2 million lakes, and the third-largest area of glaciers in the world.

Biodiversity in Canada is at risk, with thousands of species in danger of disappearing. The national conservation status of species at risk is assessed by the Committee on the Status of Endangered Wildlife in Canada, which sets out several risk categories:

As part of the process for identifying species at risk, the National General Status Working Group, a joint federal–provincial–territorial body, prepares a regular report on the status of all wild species in Canada. Species that are ranked as “may be at risk” are prioritized for assessment by the Committee on the Status of Endangered Wildlife in Canada, which advises the federal government about species that should be listed under the Species at Risk Act. The Minister of Environment and Climate Change makes a recommendation to the Governor in CouncilFootnote 1 as to which species should be listed under the act.

Species that are extinct or in decline in Canada

Tragically, some species have become extinct in Canada. Other species are in decline and are endangered or have threats that have increased their risk of extinction (Exhibit 1).

Species in Canada with signs of recovery

Some species have been brought back from the brink of extinction (Exhibit 2).

Canada has ratified or accepted 5 major international agreements that focus on biodiversity. The overarching agreement is the Convention on Biological Diversity and associated protocols. The objectives of this convention are the conservation of biological diversity, the sustainable use of its components, and the fair and equitable sharing of the benefits of commercial and other uses of genetic resources. The agreement covers all ecosystems, species, and genetic resources.

The Convention on Biological Diversity is complemented by 4 other international agreements:

These major agreements are supplemented by others among fewer countries, such as the Convention for the Protection of Migratory Birds in the United States and Canada.

Protecting biodiversity in Canada is a joint effort that requires the collaboration of many parties. The federal, provincial, and territorial governments share responsibility for conserving biodiversity and for ensuring the sustainable use of biological resources. Also playing essential roles are Indigenous peoples, property owners, businesses, conservation organizations, municipalities, research institutions, foundations, and other groups. While the collaboration of many parties is important, the federal government also has an important leadership role to play.

The federal government is responsible for protecting the biodiversity of oceans, waters, and lands under its jurisdiction. This responsibility extends to aquatic species, migratory birds, and federally listed species at risk.

Although Canada does not have overarching biodiversity legislation at the federal level, there are several pieces of relevant federal legislation, including the following:

Provincial and territorial governments are the primary custodians of the natural resources within their boundaries, and some have developed their own biodiversity strategies. They are responsible for managing wildlife, overseeing resource development, and planning land use within their respective jurisdictions.

The tables and charts below provide a snapshot of the status and trends of species at risk in Canada. While not complete, the snapshot presents the best monitored information available at this time. The federal government’s environmental sustainability indicators provide additional information on biodiversity.

The national status of wild species in Canada ranges from species with no conservation status rank assigned, to species that are extirpated or extinct (Exhibit 3). The 50,179 species described in this table are those that have been formally identified—only part of the estimated 80,000 species that exist in Canada.

The Committee on the Status of Endangered Wildlife in Canada has identified 841 species that are at risk (Exhibit 4), but this covers only a small fraction of Canada’s species thus far. Even so, a committee assessment does not necessarily result in a listing under the Species at Risk Act: The Minister of Environment and Climate Change is responsible for making recommendations to the Governor in Council on which species to protect under the act. So, the numbers of final decisions made, listed in the “Species at Risk Act (Schedule 1)” column, vary from those of the committee assessments.

The species assessed as being in the extirpated, endangered, threatened, and special concern categories are considered at risk.

Exhibit 4—Number of species at risk in Canada, assessed by the Committee on the Status of Endangered Wildlife in Canada and listed under the Species at Risk Act (by risk category)

Note: This table does not include the 23 extinct, 203 not at risk, and 62 “data-deficient” species that the committee has also assessed. The Governor in Council has not listed under the Species at Risk Act all of the species at risk identified by the committee.

The numbers of committee recommendations to the Minister of Environment and Climate Change on species at risk vary, depending on the species’ biological classifications, also called taxa (Exhibit 5).

Exhibit 5—Number of species in Canada assessed as extirpated, endangered, threatened, and special concern, by taxon (biological classification), as of May 2022 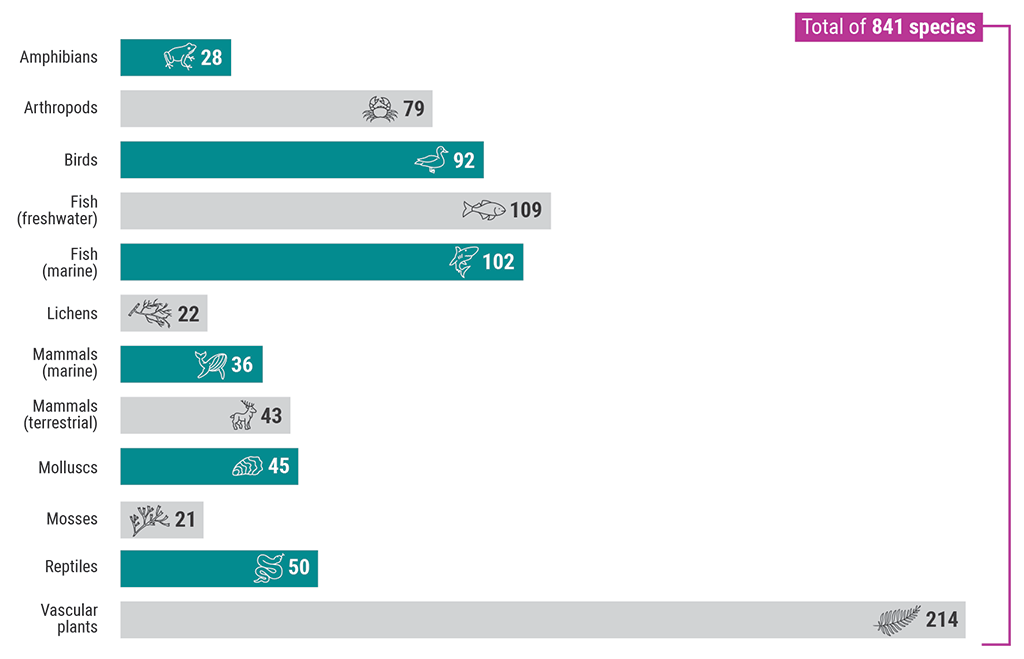 Source: Committee on the Status of Endangered Wildlife in Canada

Since Canada developed its first list of endangered wildlife in 1978, the number of species identified by the committee as being at risk has increased steadily (Exhibit 6).The rising trend reflects a combination of the committee assessing more species over time and of species becoming more at risk.

Exhibit 6—Number of species at risk assessed as extirpated, endangered, threatened, and special concern by the Committee on the Status of Endangered Wildlife in Canada, 1978 to 2022

Source: Committee on the Status of Endangered Wildlife in Canada

Governor in Council—The Governor General, who acts on the advice of Cabinet and, as the formal executive body, gives legal effect to those decisions of Cabinet that are to have the force of law.