At a GlanceReport 2—Processing of Asylum Claims

This audit focused on whether the Canada Border Services Agency; Immigration, Refugees and Citizenship Canada; and the Immigration and Refugee Board of Canada consistently processed asylum claims in an efficient and timely manner.

This audit is important because the rising number of asylum claims is testing the ability of Canada’s refugee determination system to process claims in a timely manner. The audit is meant to provide parliamentarians and the public with an understanding of how well the system is performing and what improvements it may need.

Overall, we found that Canada’s refugee determination system was not equipped to process claims according to the required timelines. Despite reforms introduced in 2012 to speed up decision making, the system was again faced with a significant backlog of unresolved claims. Since the system was not flexible enough to respond in a timely way to higher claim volumes, the 2017 surge of asylum seekers led to a backlog and increased wait times for refugee protection decisions.

We also found that a series of inefficiencies contributed to delays in processing claims. There were significant gaps in information sharing and duplication of effort among the three main organizations involved in the claims process: the Canada Border Services Agency; Immigration, Refugees and Citizenship Canada; and the Immigration and Refugee Board of Canada. For example, the organizations used different information technology systems, with limited interoperability. Although the organizations shared some information electronically, they still relied on paper and faxes to share specific claim information. In addition, few claims that were eligible for faster processing received quicker decisions. As a result, claims that could have been fast-tracked tied up the system instead.

Finally, hearings for almost two thirds of claims were postponed. Most of these postponements were due to issues that were within the government’s control and resulted in delays of several months. In fact, because new hearings were scheduled first, claimants had to wait an average of five months for a new hearing date after a single postponement. 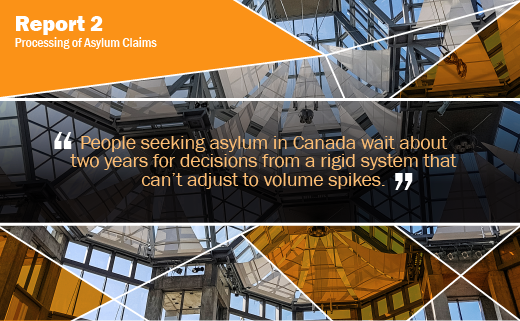