This year, our financial audits made us aware of about 30 significant projects with IT components—planned or underway—that affect financial reporting at various federal organizations, including Crown corporations. During our financial audits, we noted new projects as well as projects that were completed during the year. The current or planned projects we are aware of are significant, because they involve systems that are undergoing major conversion or replacement as well as changes to IT management in some organizations. Examples include the following:

The government is exploring alternatives to replace the Phoenix pay system. This initiative was not at the project stage but could become a major project.

The risks and challenges involved in projects with IT components depend on their type and complexity. Examples of significant risks often seen in such projects include

It is important for federal organizations to implement good governance and project management practices to manage the risks and challenges of significant and complex projects with IT components. In 2019, the Treasury Board approved new project management policies that focus on clear accountabilities, capacity building, and risk management. Among other things, these new policies were the government’s response to a rapidly changing technological environment and the need for more agility. One of the key areas of the new policies is to require organizations to clearly define and realize expected outcomes and benefits.

Our Commentary on the 2017–2018 Financial Audits listed some commonly used practices to help manage the risks and challenges of these types of projects. It also included questions parliamentarians could ask federal organizations planning significant and complex projects with IT components to ensure they anticipate and address possible issues.

How voted expenditures are managed by departments and agencies

What can departments and agencies do with the voted expenditures

During the fiscal year, the spending plans of departments and agencies may change as their needs evolve or circumstances change. They may request changes to their voted expenditures after Parliament has approved the Main Estimates. The government may table 1 or more Supplementary Estimates in order to seek parliamentary approval of new spending measures. Two additional situations may occur:

The actual costs of an organization’s activities can be lower than the amounts forecast in the voted expenditures. In these cases, at the end of the fiscal year, most departments or agencies may carry forward into the following year up to 5% of voted operating expenditures and up to 20% of voted capital expenditures that were not spent during the fiscal year.

At the end of the fiscal year, any unspent voted expenditures remaining after reprofiling and carrying amounts forward will lapse, meaning they are no longer available for spending by departments and agencies.

After the end of the fiscal year, each department and agency reports through the Public Accounts of Canada on the status of the funds approved by Parliament and the amounts it spent during the fiscal year (Exhibit 9).

Exhibit 9—How voted expenditures are managed in a fiscal year 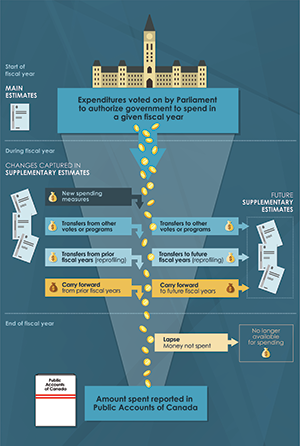 The federal government provides loans to individuals, organizations, and other governments. The government’s 2018–2019 consolidated statement of financial position shows $26 billion in loans, investments, and advances (other than those to other Government of Canada–related organizations), with a provision for bad debt of more than half of that amount (Exhibit 10).

Exhibit 11 provides an overview of the life cycle of a loan receivable, including the impact of the provision for bad debt and the write-off of a loan receivable on the financial statements of the Government of Canada. For example, loans issued under the Canada Student Loans Program represented a significant balance. In the 2018–2019 fiscal year, loans and interest receivable for this program totalling $579 million were written off or forgiven. 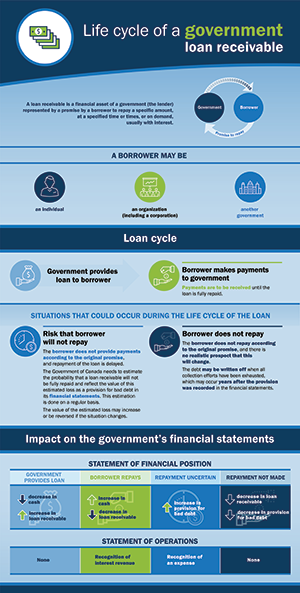